Synopsis
When Walter Gropius opened a new public school in Weimar, in 1919, succeeding the Academy of Fine Arts and the Arts and Crafts School, he wanted to change the world with a new attitude towards everyday objects and architecture. But the world has never readily agreed to change. The Bauhaus was moved and abolished, challenged and celebrated. From Weimar, it was moved to Dessau and then to Berlin. When it was closed by the Nazis, the directors, many professors and students, left Germany.
The Bauhaus can be everyday subject of conversation; the short retrospective about its history also could be made, especially today when, via mobile phones, we can get a whole picture about this movement.

Bauhaus - Audio collage is composed of sound and music fragments mixed with the testimonials of the protagonists and commentators. In this collage were used sound archives of interviews with historians Andrej Mitrović, Robert Hughes and Oto Bihalji Merin, interviews with Bauhaus' deans, Walter Gropius and Ludwig Mies van der Rohe, as well as the one made with the Bauhaus' student Avgust Černigoj. Commentators are architects Ljiljana Blagojević and Ivan Kucina, painter Biljana Đurđević and historian Jelena Volić Helbuš. 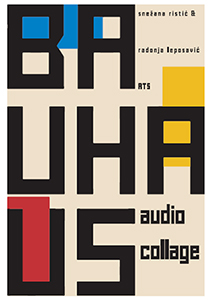