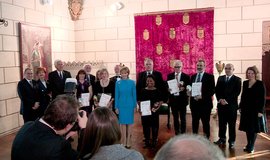 Grand Prix Nova had the privilege of being invited to honour its winners inside the elegant residence of the Romanian Royal family. All the present guests celebrated the end of a week of great radio dramas by sharing a glass of fine champaign with her Royal Highness Princess Margaret of Romania. The President of the Jury, Mr. Nils Heyerdahl, held the most inspiring speech about the entries selected for the top 5 in the Radio Drama and Short Forms categories and announced the big Grand Prix Nova champions.

Your Royal Highness,
President & General Director,
Other members of the Radio Romania management,
Ladies and Gentlemen,
Colleagues and Friends,

It is indeed a great honour and a great pleasure for me to announce the results of the first Grand Prix Nova, founded and hosted generously by the Romanian Radio. But before doing so, I want to express our gratitude to you, your Royal Highness. We feel privileged to be invited here to this beautiful palace and we are grateful that you will yourself hand out the prizes to the lucky winners of this competition.

The jury and the delegates have been working hard, listening to 48 entries in two categories, discussing and evaluating what we heard – and by doing so, we have formed a community of professionals, exchanging ideas and points of view, which is very important for the future of our art, Radio Drama. Thank you Radio Romania for bringing us together in this way.

Before the announcement I want to say to all the participants that if your entry is not awarded, it does not mean that it is not worthy a prize. But the rules say that we have to chose only five entries in each of the categories, and then rank the winner, the number 2 and the number 3: Gold, silver and bronze.

I now invite your Royal Highness, Crownprincesse Margerita and President Ovidiu Miculescu to be so kind to join me on the floor for the prize giving.

I will start with the category of short radio dramas, which means programmes up to 10 minutes in duration. The five titles on the short list, in alphabetical order, is:

Returning from the Hunt, entered by Bosnia and

The 26th Century Fox and Crow from Russia.

I will now announce and give the jury’s brief statement on the three entries ranked at the top.

Breathing new life into our genre is one of the stated aims of this new gfestival of Radio Drama, and in third place in the Short Drama category the author has created her own sound? Birth certificate. An imagined memoir of her own early childhood in Rwanda, we congratulate Aurelie Lierman from Belgium on a deep and honest piece of acoustic art in the drama iota mikro.

In second place, an ancient ritual reunites father and son in a 7 minute distillation of the themes of one of the world’s greatest plays. Using real sound and a dual perspective, this programme combined tradition with modern life in a beautiful miniature, titled Allas, poor father, entered by the Romanian Broadcasting Corporation Authors: Petre Barbu and Attila Vizauer, who also directed it..

And the winner of the Short Drama in this first year of the Grand Prix Nova is a microcosmos of this week’s discussions in the festival.

A joyfull, representative Tower of Babel gave us big ideas with a light touch through multi-lingual alphabets. The jury awards first prize to Glagoljon from Croatia, authors: Stephanie Jamnicky and Zoran Sajko.

Then we turn to the other category.

Third prize in the Drama category goes to a disturbing, unpredictable blend of documentary and fiction. Brave audio art from a risk-taking programme maker, this radio poem considers the meaning of sin in the 21st century. Title Peccata mortalis, entered by Austria.

In second place, some familiar themes and problems were given an entirely new perspective by the casting choices. We experienced the subject of old age in a fresh way as children played all the roles under skillfull direction in

From BBC, UK. Directed by Pauline Harris. The prize will be collected by the head of the Radio Drama Department in BBC, Alison Hindell.

And the winner of the inaugural Grand Prix Nova goes to what can onll be described as an audio masterpiece. An existential meditation with beautiful sound played with the idea that we are all Faust. A personal work of art with a human heart, the jury applauds the skill and bravery of Faust Song of the Sun by Werner Fritsch from Germany. Congratulations!